For decades, the Welaka National Fish Hatchery has participated in the effort to propagate and restore this important, native, non-venomous apex predator species to historical habitats in northern Florida and other areas where they are seriously compromised. The diet of the Eastern Indigo consists of rodents and venomous snakes, helping to ensure a healthy ecological balance for forest creatures. 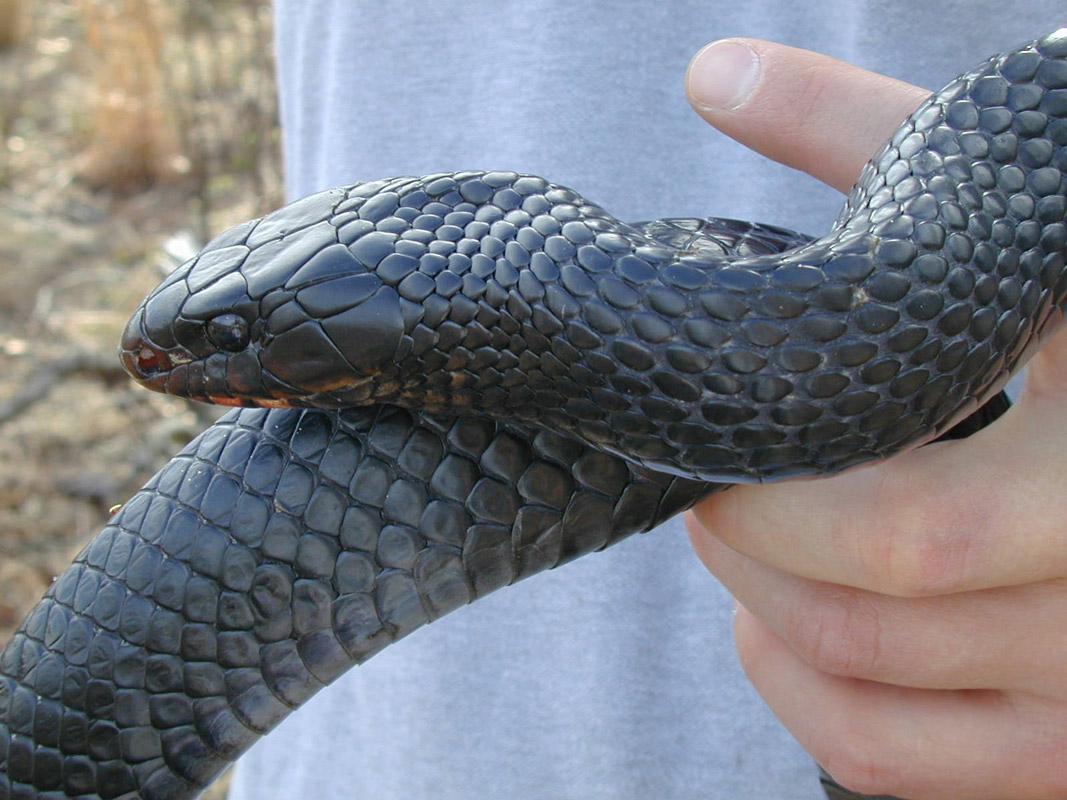 The Eastern Indigo Snake (Drymarchon couperi) is listed as federally threatened under the Endangered Species Act. Primary causes for the population decline of this species include habitat loss and fragmentation and over-harvest for the pet trade. It is also believed that significant numbers of Indigos have been killed by rattlesnake hunters gassing Gopher Tortoise burrows in search of rattlesnakes.

Although the snakes were once found throughout southern Georgia, Alabama, eastern Mississippi, and throughout Florida, their range is now greatly reduced. 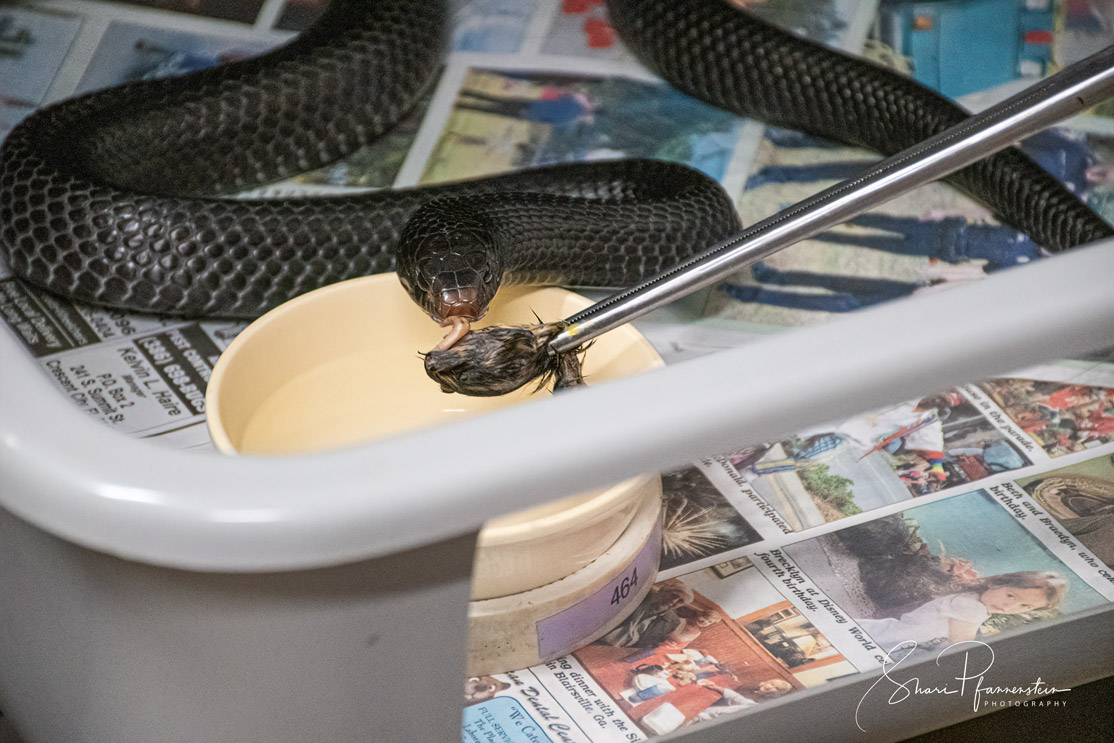 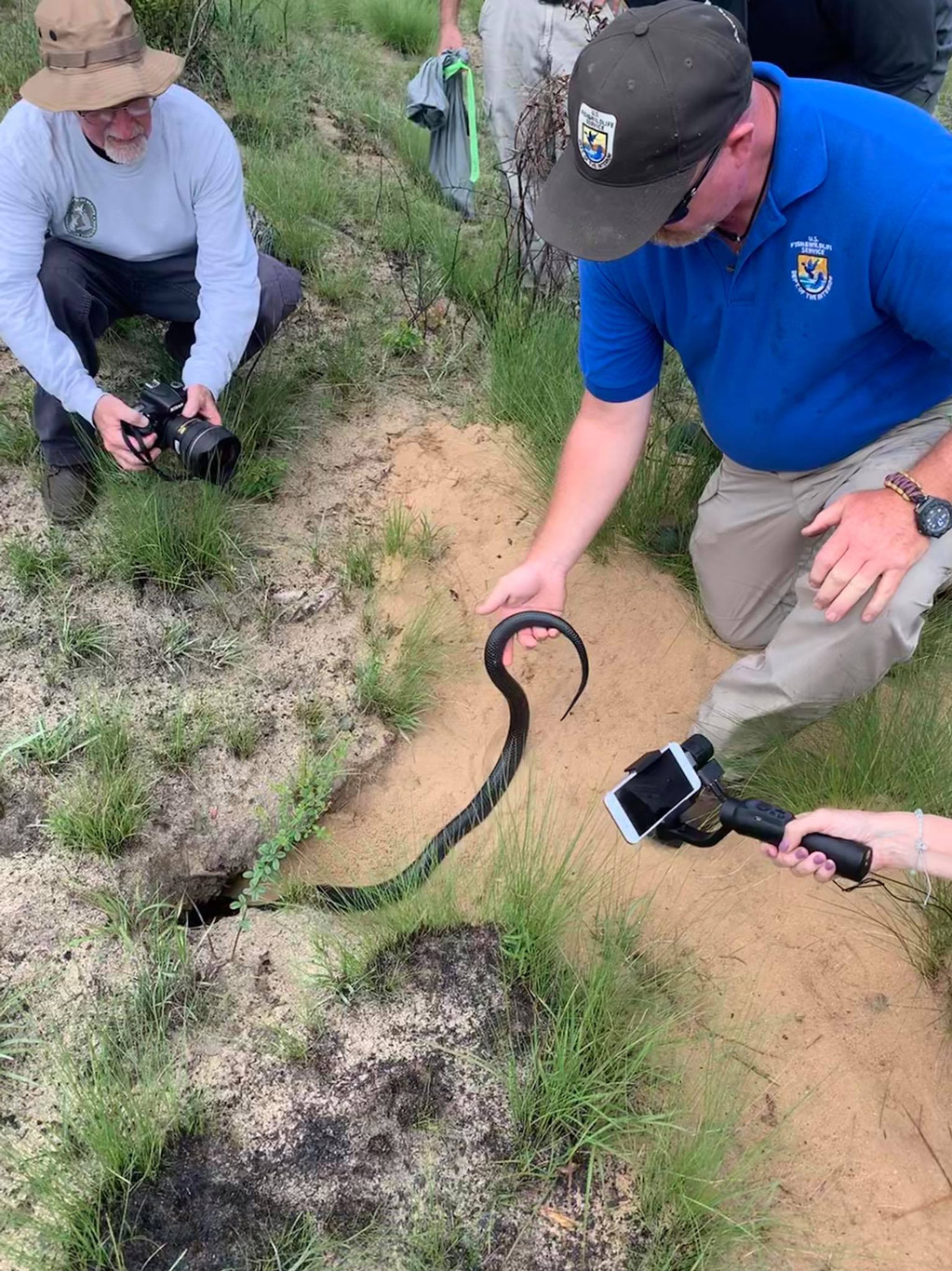 Protocol for Incoming Snakes at Welaka

When Welaka receives year-and-a-half-old snakes from the Orianne Center, Hatchery staff places them in an area optimally designed where the snakes can be properly housed and cared for. Indigo tubs are cleaned each morning, the snakes transferred to another tub while soiled newspapers are tossed and replaced. 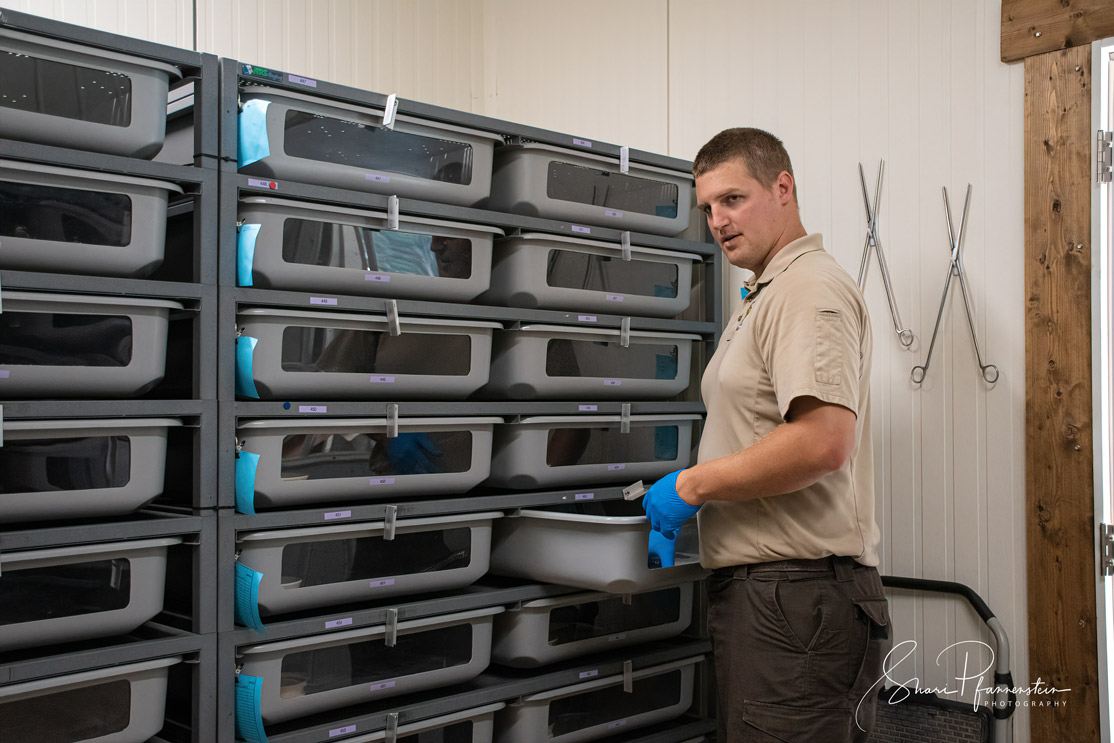 Welaka biologist Jorge Buening is shown with racks of special tubs housing the young Eastern Indigo Snakes until they are ready to be released. Photo: Shari Pfannenstein.

The sex of each snake is determined, procedures are followed so they can be identified if they are found after being released, and they are tested for parasites.

They are fed a hearty diet of dead mice, quail chicks and rainbow trout. After they grow to about four-and-a-half feet long and gain a couple of pounds, they are transferred to Conecuh or Apalachicola Bluffs, a Nature Conservancy property, and released.

“The old stereotype of fish hatcheries doing fish and fish alone no longer holds,” stated Tony Brady, deputy project leader at the Welaka National Fish Hatchery. He continued, “We’re getting into non-traditional things that shows we can adapt to any situation we’re entrusted with.” It is important to note that future plans for Welaka include the propagation and release of the Gopher Tortoise, another step forward in conservation.

A Symbiotic Relationship with Gopher Tortoises

The following 2019 YouTube video (no audio) by the Florida Fish and Wildlife Conservation Commission shows the release of captive-propagated Eastern Indigo Snakes at The Nature Conservancy’s Apalachicola Bluffs and Ravines Preserve in Bristol, FL. Note the young snakes seeking out the Gopher Tortoise holes as a safe refuge.

The next video is from Panama City News Herald (with audio) and shows The Nature Conservancy in partnership with FWC and others releasing 20 Eastern Indigo Snakes into the Apalachicola Bluffs and Ravines Preserve to help reintroduce the apex predator to the area. Video Credit: Any Wraithmell 2018.